The TeleMe 2 robot is one of the telepresence robots manufactured by MantaroBot. The TeleMe 2 differs from the original TeleMe telepresence robot by providing some new features, such as a quiet drivetrain, ability to pan 360° the tablet holder, and support for Windows tablets such as the Microsoft Surface Pro.

Users of the TeleMe 2 telepresence robot can use any video-conferencing application on their tablet. The TeleMe 2 can be controlled via a Windows, Mac, Linux, or any device with a modern web browser by downloading and installing the control application or by using the web-based MantaroBot TeleGo app.  Additionally, users can operate the TeleMe with the MantaroBot TeleMe Robot App, which can be downloaded from the Google Play store.

The MantaroBot Teleme 2 uses the tablets microphone and speakers for sound. However, a holder with built-in Bluetooth speakers is available for purchase. Other optional features include LED base headlights, a charging dock, a laser pointer, a motorized mast with increased pan, an extended life battery, and more.

Unique Features: Tilts 85 degrees down and 45 degrees up

Device is not included: Users may use their own iPad, iPhone, Android or Windows tablet or smartphone.

The TeleMe 2 device holder accommodates the Apple iPad and iPhone, Samsung Galaxy Tab and S4, and the Microsoft Surface Pro 3 and 4.

Auto-Tablet Charging: When the TeleMe 2 is plugged into it’s charger, the tablet or smartphone will be charged as well.

Users can use any video-conferencing application. 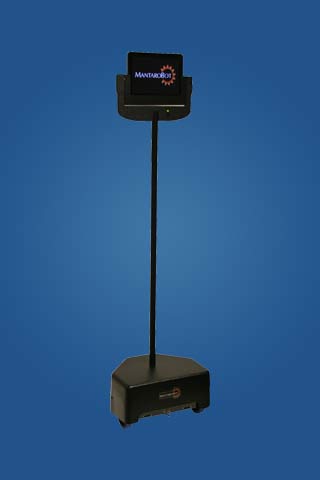 I took MantaroBot’s TeleMe 2 telepresence robot for a test drive today and found it easy to understand, use, and customize according to my preferences. If you’re unfamiliar with the emerging technology of telepresence robots, these robots are designed to allow users to interact with colleagues and remote physical environments during conference calls, security surveillance, and other teleconferencing situations. The TeleMe 2 allows users to maneuver it forward and backward, with gradations veering to the right or left, and also enables users to tilt the camera perspective up, down, right and left (and combinations thereof). Users move the robot by clicking and holding the mouse button, and moving the pointer on a small directional field window (the drive pad), or have the option of driving by using the arrow, Ctrl, and Alt keys on a computer keyboard. It is also possible to control the robot via a computer joystick; I haven’t tried this out, as I don’t have a joystick. One can adjust the camera perspective with one’s left hand (using the A, W, S, D, and C keys) while controlling the robot’s movement with one’s right hand. The TeleMe 2 also allows users to create up to three preset camera positions. To make my maiden voyage smoother, my presets included straight ahead, downward (in order to double-check for obstacles), and backward (since this TeleMe 2 included the optional 360° pan), which gave me the ability to “look around” but quickly snap back to default views without needless extra fussing with the controls.

The TeleMe 2 includes sensors to detect approaching obstacles, and automatically reduces speed in their proximity. The top speed is slow enough that novice users don’t need to worry about inadvertently crashing into obstacles and damaging the robot. Users can play it even safer and adjust the speed of the robot, as well as the sensitivity of the drive pad, to minimize jerky movements while learning to maneuver the robot. The TeleMe 2 supports optional features such as the ability to pirouette (spin clockwise or anti-clockwise in one spot), headlights (with three settings) to accommodate users needing to move through or perform surveillance on darker rooms and areas, a laser pointer for use in meetings, and newer circuitry that allows charging of higher powered tablets such as the Microsoft Surface Pro 3. All TeleMe 2 robots feature a new drive train, quiet enough to be unobtrusive in business, hospital, or home environments.

Operation of TeleMe 2 robots isn’t limited to computer users, however; users can also operate the robots via tablet or phone. Businesses that prefer to keep all communications in-house can configure the TeleMe 2 to operate on their secure networks. During my test drive, I operated the robot via a combination of the Chrome browser (for the drive pad) and Skype for Desktop, but other browsers and audio/video conferencing software work as well. From my conversation with Kamal, who graciously answered my many questions during the test drive, I learned that in the near future they will be releasing a MantaroBot Controller for Android that will allow Android users to simultaneously run video-conferencing software and their controller app in the foreground; this will enable those customers that prefer to use one single mobile device to control their MantaroBot and simultaneously conduct the audio/video conference.

If you’d like to try out this technology but are worried it might be too complicated for you, let me reassure you that the manual’s operation instructions are easy to understand and the controls are intuitive. The TeleMe 2 robot is easy to use, allows remote users greater versatility as they interact with their colleagues and distant physical environments, and offers businesses a practical upgrade on existing teleconferencing or remote security surveillance technology.

I had the pleasure to perform a demo drive of MantaroBot’s TeleMe 2. Setting up the appointment was easy – I only had to fill a simple form and was soon contacted by the team. They were extremely helpful and flexible with their time, which is a great plus for anyone with a busy schedule. I was provided with a detailed manual and a thorough explanation about entering the system days prior to the appointment, so that I could be prepared for the demo drive. I have to admit, I was very eager to try this telepresence robot, as the professionalism of the team had impressed me and my expectations were set high. I’m happy to say – they were absolutely met.

Essentially, the TeleMe 2 is a moving base for a tablet that serves as the “head” of the robot. It supports a couple of devices – Microsoft Surface Pro (3 and 4); Apple iPad; Apple iPhone; Samsung Galaxy TAB and S4. Perhaps the most useful service that MantaroBot offers is that their telepresence robots are highly customizable. This means that even if your tablet isn’t compatible with the body, you will still be able to use the robot after a modification from the MantaroBot engineers. The base contains the battery and all of the electronics and the pan and tilt are done only by the head, independently from the base.

The TeleMe 2 can be used with any conference program (Skype, Google Hangouts, Cisco, Polycom, etc.), making this robot a great choice for any company that wants to keep their communication private. It’s also great that I wasn’t required to install anything before driving the robot, as there is a web-browser based control available. Another smart feature is the telepresence robot’s ability to connect from one wifi to another, so that the signal remains good while you’re moving around. I really liked that when you’re tilting and turning the head, you can memorize the position of the camera and quickly return to it, making conversations in meetings much more natural.

As for the hardware, I was informed that TeleMe 2 is much lighter than its predecessor – about 15 pounds so. Its battery has been improved and the motor is much quieter. I couldn’t personally confirm that, as I haven’t had the pleasure to try out the original TeleMe, but I did notice that the motor definitely wasn’t loud. There’s a collision detector that helps you avoid damaging your telepresence robot. This was very welcome, as there was some delay in the connection and it was a relief not being able to run into a wall full speed. As for charging the robot – getting the TeleMe 2 in the docking station isn’t automatic, but it is easy enough.

I also learned that the TeleMe 2 has some great features like headlights, a laser pointer and a Kensington lock adapter (that helps you keep your robot safe). You can even get a shirt hanger and trailer or a hitch, so that it can be towed.

To sum up my experience, here are the pros and cons of the TeleMe 2:

– Not a lot of supported devices, although it could be customized to support almost everything
– The design of the web-based control could look better
– Delay (however, this was probably caused by the wi-fi connection, rather than a flaw of the TeleMe 2)
– Manual docking

Was this review helpful to you?
Yes
No
Cancel reply
(2 customer reviews)