Looking to save money for your company and cut both time and travel?  Telepresence robots will enable you to do all of that while simultaneously creating more engaging remote experiences, whether for executives jumping in on meetings or scouting out a new store layout, or for companies providing remote tours.

The Beam Pro is being used in corporate, manufacturing, medical, and sales environments to increase productivity and reduce costs!  Take advantage of a telepresence robot to conduct corporate training, have a commanding remote presence, conduct company tours, and meet with clients or fellow executives or employees.

The Beam Pro (BeamPro) robot is produced by Suitable Technologies as another addition to the field of business telepresence robots. Sporting a 17″ screen, the Beam telepresence robot has many features distinguishing itself from competitors.  The large screen and more imposing size provide a stronger presence and command greater attention in the workplace.

The robot can be setup to allow auto-activation, where a remote user can use the robot right away, as well as setting up an introduction, where the call from the remote user must be answered.  This answering feature can also be performed through their mobile app, so if a customer wishes to log into your Beam Pro, and attempts to log in from their home, you can accept that call from wherever you are using your Beam mobile app.

The Beam Pro provides an enhanced ability to read facial gestures due to the large screen which helps to improve user experience. Two HD cameras provide a 170-degree wide-angle horizontal and vertical field of view, mitigating the tunnel vision you often get with traditional web-cams. The BeamPro also has four wireless radios that allow it to be connected to multiple wireless points at the same time and seamlessly transfer between points with no latency or lag.  The Beam is the only telepresence robot to implement this feature as the technology has been patented by Suitable Technologies (the manufacturer of the Beam robots).

The Beam robot implements a six microphone system which allows for reduced background noise and echo-cancellation. Also included is a feature called “Party Mode,” which seeks to cancel out all noise except what is directly in front of you; great for manufacuring or warehouse or group environments. The Beam Pro offers a stronger speaker output than the Beam Plus, capable of outputting around 100 decibals.  In the future they plan to have an “Active Listening” feature, in which the Beam will attempt to match the correct volume to your surroundings.  If you are in a quiet room?  The volume will decrease.  If you are in a manufacturing plant, the volume will increase accordingly.

The BeamPro boasts an approximate eight hours of battery life, allowing you to get a full day of work in without the need to seek a recharge.  When a recharge is necessary, the user can simply drive the robot back to the charging station.

The Beam currently works with Windows 7 (or higher) and OS X 10.7 (or higher) operating systems (Not Linux compatible at the moment). Additionally, Suitable Technologies has also released functionality for Android and iOS devices using the Beam apps, allowing users to operate the robot using those tablets or smartphones.
*Monthly Contract Required.

Auto-Docking: Yes. When close, hold a button while the robot positions itself.

Can operate with your mouse, keyboard, or Xbox controller.

Available for Windows 7 or higher, and Mac OS X 10.7+. Beam program has free and automatic updates.

For best results a 2Ghz Intel i3 processer or better and 2+GB of RAM.

Front loud-speaker can produce up to 90 decibels.

Security: The Beam+ and BeamPRO robots use TLS/SSL encryption protocol to keep your data private and secure.

Just from the fact that Scott Hassan from Willow Garage is the CEO I would say Beam is heading in the right direction. Suitable Technologies is even providing Beams (for an extremely small fee compared to traditional costs) at conferences to attend. Instead of flying out and getting a hotel room and all that I heard that you can just use a Beam and move around the conference. SWEET!

The Beam is top notch. When driving it around at conferences and busy rooms the noise cancelling microphones, allowed me to easily hold a conversation and not straining to hear them over the background noise. The wide angle cameras and sight-lines on the navigation screen kept me aware of what might come into my path, a real bonus when driving around crowded rooms, allowing me to to avoid feet, cables, and trash cans. There was a balloon that I got tangled up with, but otherwise the driving was smooth. It wasn’t jerky like I anticipated, so I often undershot when moving around. I did initially worry about getting hung up or falling over when I was crossing electrical strips, but there was enough ground clearance that I didn’t. PROS: Wide angle camera view, Noise cancelling mic. CONS: Cost can be prohibitive.

Overall I really enjoyed the BeamPro really wish that it was offered at more conferences and events. My travel schedule sometimes needs me to be in two places at once, and I prefer this over many others I’ve controlled.

1 out of 1 people found this helpful. Was this review helpful to you?
Yes
No

I’ve been using the Beam Pro for four months and it has been a workhorse.We have used it in various capacities without any problems. For presentations, robotics demos(for industry).
We are getting ready to teach a programming class and class for App development.
I have used other telepresence robots over the last five years, but this system was the most stable and durable without flaws.
A MUST TRY PrODUCT.

Was this review helpful to you?
Yes
No
Cancel reply 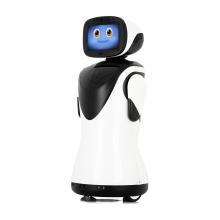